This all-day field trip was to a part of Victoria not previously visited by DSWAA.  The region around the Campaspe Valley and Redesdale, an hour and a half north-west of Melbourne, is surprisingly rich in its geologic and social history and this has led to a wealth of fine dry stone walls, yards and sheepfolds.

The tour was hosted by Committee member Geoff Thomas and attended by more than forty members and non-members. Luke McGrath, son of Henry McGrath – a highly regarded waller in the district – talked about his father’s work.

The tour included visits to walls well away from the public gaze; excellent examples of nineteenth century craftsmanship and rudimentary walling skills of various styles, mostly in very good to excellent condition.  We were generously welcomed onto properties by their owners and this access is one great advantage of field trips and such a privilege for us.

This is a very good example of standard dry stone wall construction (ie. two faces of stone with carefully placed rubble infill or hearing). An interesting feature of this wall is the ‘coursing’ which becomes more evident when looking along the wall. Like many walls, egos one could benefit from some minor maintenance. Missing face stone and plugging can lead to early deterioration of a dry stone wall.

Rowanston On The Track winery

Walls here are standard dry stone construction but many sections have been damaged and in some cases repaired some time ago with poor walling techniques. A severely deteriorated section of wall has the remnants of a double lunky. A lunky is an opening through a dry stone wall that allows a rivulet or small stream to pass through. Lintels support the wall construction above the opening.

Kimmel Property sheepfold
This finely constructed wall stands proudly at the top of a rise and in beautiful harmony with the ancient red gums in the landscape. Excellent workmanship has ensured its excellent condition as well as the basalt cap foundation on which it was built preventing movement. It has wire mesh under the copestones which was probably to deter rabbits which, in the mid 1800s, were in plague proportions throughout Victoria. However, the purpose of the wall is unclear. It is L-shaped in plan and runs ~150 metres in each direction. There is no doubt it would have provided an excellent shelter for stock but, being open on two sides was unlikely to deter rabbits. Interestingly this wall avoided a common fate of damage by rabbiters.
Thomas Property North Redesdale Road
These remnant walls exhibit some former glory! They are often excellent markers of early title or land division and can assist historians tell the stories of early agricultural practices. The new freestanding walls were rebuilt by TAFE students as part of their landscaping course.
North Redesdale Road roadside
It is not unusual to see these ‘composite’ walls using fence posts and wire supported by a row of roughly placed stones.
Judson Property North Redesdale Road
This standard wall construction on the roadside is a 19th century wall with a repaired section and a recently constructed wall – all easily distinguishable by the lichen cover or lack of it.
Brady Property Gibbards Lane sheep fold or other shelter
In 2009 the City of Greater Bendigo Heritage Study Stage 2 recommended heritage overlay protection for this wall’s local significance.
The allotment on which it stands was granted by the Crown to John Ferguson on 28 June 1864 and the wall is thought to have been built during Ferguson’s period of ownership. He died on 23 July 1867 and the owner of the property became George Thomas Charity.
This sheep fold is a magnificent structure on a high point of the property – a parallelogram that follows the contours of the landscape. Fine walling technique is evident. Wall openings for stock movements have well built ‘stop ends’ for gates. This wall could have served to contain stock when they were moved from distant properties to markets or been an enclosed area for crops. 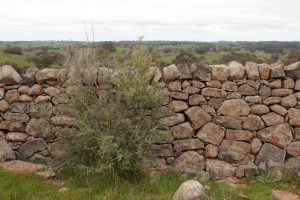 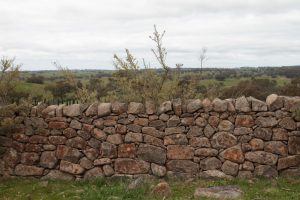 Melicytus dentatus (Volcanic Plains variant)- Tree Violet – is a shrub (above) that grows up to 4 meters tall on rocky, exposed granite areas and several of these are close to the walls on this property. Whilst not listed as endangered, Melicytus dentatus is one of the species in the Grassy Eucalypt Woodland of the Victorian Volcanic Plain ecological community which is listed as critically endangered under the Federal Environment Protection Biodiversity Conservation Act. We understand the requirement on councils to ensure this and other vegetation in this ‘community’ is not disturbed is likely to have a protective effect on some dry stone walls too.
Recognition of the Traditional Owners
A recognition and Settlement Agreement between the Dja Wurrung people and the State of Victoria was celebrated at Yepenya on 15 November 2013 which recognised the Dja Wurrung as the Traditional Owners of Central Victoria. The Agreement is a means by which Dja Wurrung culture and traditional practices and the unique relationship of the Dja Wurrung people to their traditional Country are recognised, strengthened, protected and promoted for the benefit of all Victorians.
We note the presence of a number of sites in the area of significance to the Dja Wurrung people and we hope to work with them to expand our knowledge about these places.
Geology
See here for A 400 Million Year Old Geological Tale, April 2016 by Geologist, Michael Robinson on the geology of the Redesdale area. 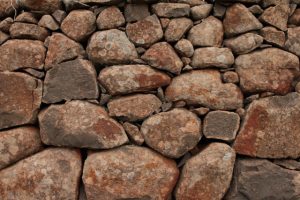 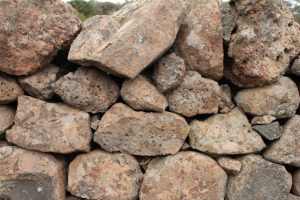 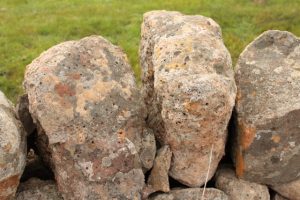 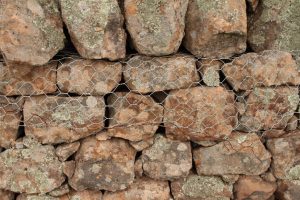 On the subject of the colour of rocks, he says:

Basalts are dark-grey to black when they are fresh. Granites are normally very pale grey, as are granodiorites (although they can have a range of colours from pinks to greys to blue-ish colours right up to reds and even some greens in places!). Most of the pink to red to brown colours you see in these rocks are a result of erosion – “weathering”. The colour comes from the fact that all these rocks contain some minerals that have iron in them (basalt contains a lot of these minerals, granite hardly any). When those minerals weather they produce iron-rich minerals such as limonite and hematite. These are orange-red in colour and spread out and ‘stain’ the surrounding rocks. The effect can be quite pervasive, resulting in the colouration of entire rock pieces. In the case of basalt, the entire rock has had some degree of weathering, and so it is now a dark brown-red colour, having lost nearly all of its original fresh black. In the case of the local granite, the original rock is nearly white, however, the little bit of iron staining that has occurred has given these rocks their slightly pink hue. Indeed, a little bit of iron staining is exactly what gives some of these rocks their spectrum of colour, resulting in the beautiful pinks and creams that you see today.

Over time, the stone surfaces are colonised by a rich variety of lichen which is not in fact a plant but a partnership between fungi and algae. The fungus provides the visible structure and absorbs nutrients from the rock which it shares with the algae and the microscopic green algae or cyanobacterium that exist between the walls of the structure, share sugars produced by their photosynthesis. 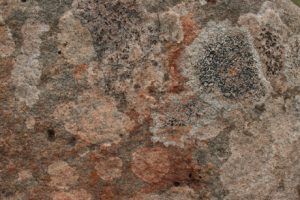 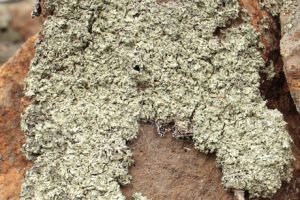 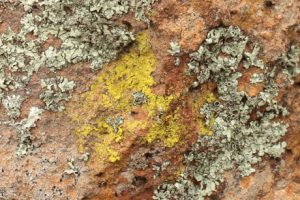 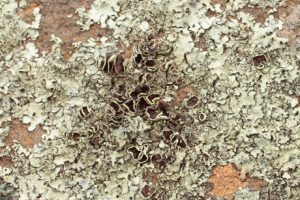 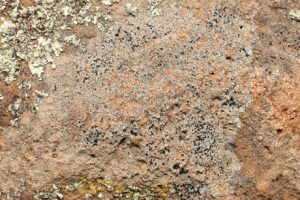 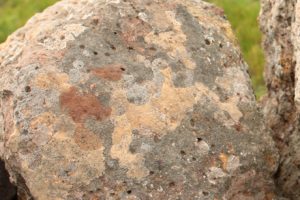 Members are very important to the DSWAA.  The Committee of Management is … END_OF_DOCUMENT_TOKEN_TO_BE_REPLACED

There's a waller in every one of us!  Written by Bruce Munday for DSWAA, Building dry-stone walls - A guide for … END_OF_DOCUMENT_TOKEN_TO_BE_REPLACED

My book ‘Those Dry Stone Walls’ is now out of print. Wakefield Press and I have … END_OF_DOCUMENT_TOKEN_TO_BE_REPLACED

For general inquiries use this form or email us: … END_OF_DOCUMENT_TOKEN_TO_BE_REPLACED