The DSWAA is a national body but with its largest presence in Victoria where it was founded in 2002. There are two South Australians (Bruce Munday and Chris Payne) on the committee of the Association, which perhaps understates the significance of our dry stone walls on the national scene.

There have been several regional field trips in SA but our main activities have been dry stone walling weekend workshops for beginners. These are held in Autumn and Spring.

As a member of the DSWAA you will be sent our journal, The Flag Stone, and be notified of:

In SA the DSWAA is actively advocating for the protection of dry stone walls in the eastern Mt Lofty Ranges, particularly in light of the proposed wind farm developments. We are also advocating for suitable repair of the heritage listed wall at Cut Hill, twice damaged in 2017 by errant motor vehicles. See here for more.

Dry stone walls in rural South Australia date from the earliest days of settlement. These were built with what was then available, generally to protect gardens from domestic livestock or to confine ration stock. Fences on a grander scale became necessary in the 1850s when many of the shepherds left their posts for the Victorian goldfields. This was exacerbated by the three-year drought of the 1860s, pastoralists becoming more protective of pastures and water from neighbours’ livestock.

In South Australia there was a strong imperative to build with stone. For one thing, in many areas there was plenty of it, which was just as well as there was relatively little timber for post’n rail fences. Resistance to fire and termites were other imperatives. Fences were invariably built from field stone, quarry stone reserved for buildings.

What to see in South Australia

‘There is not one man in a hundred that can build a proper stone wall’.

Nonetheless, not a lot is known about the identity of these wallers – after all, they were mostly just building fences.

Some of the most striking walls are in the eastern Mt Lofties from Springton to Moculta where there is plenty of stone and generally fine stone for building.

One of the most notable wallers in the period from 1860 to 1880 was Levi Meakins who must have built many miles of high quality walls. In due course he became overseer at Rosebank which must have given Melrose a degree of satisfaction!

We can discern a very clear Irish influence in the mid-North of the state. Many walls were built in the Galloway style, rarely seen outside of Ireland, where the smaller stones were laid on the lower courses by children, larger stones placed on top by adults.

This area, with towns such as Clare, Auburn and Jamestown had large populations of working class Irish looking for a new life after the devastating famine. Perhaps the most mentioned waller was Patrick O’Grady on Bundaleer Station and later on Canowie Station. He is remembered in a hand-written note from one Joe Gerke as ‘a little old man with long ringlets who always wore a green ribbon in his coat’. 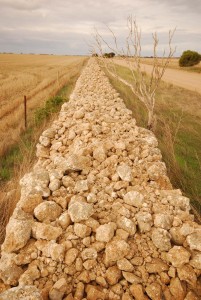 The main area for walls on Yorke Peninsula is near Edithburgh. These walls tell us everything about just how stony this region was before it was cleared for agriculture. Random rubble limestone is seldom the waller’s stone of choice but if that’s what you have got that is what you use.

There are no through-stones or coping stones because there isn’t the suitable material, and many of the walls are quite low with posts or droppers adding a further half metre or so to the overall height.

Having said that, some of the more enduring walls are actually quite high and wide, but even these often had wooden posts embedded, presumably supporting at least a single barbed wire at the top. 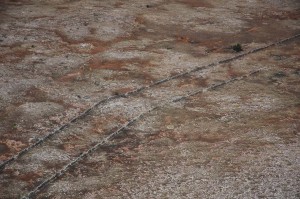 On the west coast of Eyre Peninsula, from Lake Hamilton to Elliston, folklore suggests that many of the limestone walls were built by Chinese brought in by pioneer settler Price Maurice on account of their capacity for hard work in trying conditions. That capacity would certainly have been tested, but whether they built dry stone walls is hard to establish. Records show that all properties had skilled tradesmen such as blacksmiths, carpenters and masons, but there are few records of skilled wallers. A rare instance is a reference to George Mahar, born in Ireland in 1844, who is reputed to have built about six kilometres of walls on Chickerloo Station, along with sheep yards and outbuildings, not to mention many kilometres of walls still standing on other properties in the Sheringa district.

The irrefutable industry of the Chinese earned them underserved praise in some quarters for the wonderful abutment on the Pichi Richi railway track from Quorn to Port Augusta.

There is actually very good evidence that this was built by skilled Welsh and Cornish stone masons supported by some 150-200 indentured Chinese labourers who helped quarry the stone. 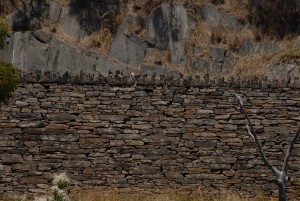 One of the most visited walls in SA is the Heritage Listed Cut Hill, literally ‘on the road’ from Adelaide to Victor Harbor. And yet few motorists are even aware of what they are passing by as they see only the parapet above the huge abutment.

Built by Jabez Grimble in 1868 this wall stands up to seven metres high on ground that slopes away at almost 45 degrees. Its name derives from the source of the stone, cut from the hill behind it on the upside of the road.

Some of the best insights into 19th century wallers in South Australia can be gleaned from the journal of Joseph Keynes, pastoralist from Dorset who established Keyneton Station in the eastern Mt Lofty Ranges in 1839. Keynes employed several teams of wallers, generally two adults and two children, who would go out on a Monday morning, returning on the Saturday evening. Camping in old shepherds’ huts with rations and pasture for horses, the team would earn 4/6 a rod (i.e. 18 shillings per chain) and could build about a chain a day depending on accessibility of stone (fetched by the children on a sled), terrain and height of wall. At this rate a mile of dry stone wall would take three months. Today with a hydraulic post rammer and high tensile wire a mile of stock fence could be erected by one person comfortably in a week (given the posts).

As I sit in my air-conditioned office penning this piece, the forecast temperature is 41C. I’m reminded of an entry in Keynes’ journal, January 1878: ‘Rode out to the stone wallers – the stones were so hot they could not handle them’.

Near Robe in the south east of the State are some beautiful limestone walls built by Levi Cooper (1838–1927), a stone mason from Devon. Cooper has been described as taciturn, perhaps on account of having ‘wooed and lost Maggie Park’, who at age 17 married Adam Lindsay Gordon. The story goes that Cooper every evening visited the Caledonian Inn where Maggie had worked, there to dwell in memory of his shattered romance. He remained faithful to Maggie, a lamenting bachelor to the end.

Here are the SA municipalities in which there are dry stone walls:

Members are very important to the DSWAA.  The Committee of Management is … END_OF_DOCUMENT_TOKEN_TO_BE_REPLACED

There's a waller in every one of us!  Written by Bruce Munday for DSWAA, Building dry-stone walls - A guide for … END_OF_DOCUMENT_TOKEN_TO_BE_REPLACED

My book ‘Those Dry Stone Walls’ is now out of print. Wakefield Press and I have … END_OF_DOCUMENT_TOKEN_TO_BE_REPLACED

For general inquiries use this form or email us: … END_OF_DOCUMENT_TOKEN_TO_BE_REPLACED